Disclosure: Some of the links below are affiliate links. At no cost to you, I will earn a commission if you click through and make a purchase.

I’m currently pregnant with didi fraternal twins right now. (Learn about didi twins here.) I have been taking twin pregnancy belly week by week pictures to show how my belly size has been changing. I’ve also written a little bit about my pregnancy symptoms week by week so that other pregnant women can know what to expect with twins.

A lot of people wonder, when do you start showing with twins? I started poking out at week 8. We didn’t even know it was twins yet, so I was very surprised when I noticed that my lower stomach was starting to stick out a little.

My morning sickness started at 4 and a half weeks, so about a month in. I was so sick I couldn’t do much. I mainly just laid in bed all during most of the first trimester. I also started experiencing heartburn, which I’ve never had in my life.

My doctor said that we’ll have an ultrasound every 4 weeks during the pregnancy because in the beginning that is the only way to check the heartbeat on twins.

Here’s a look at my pregnancy week by week starting with week 9. 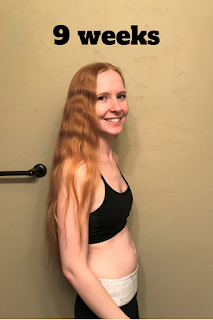 This picture was taken the day after we found that that we’re having twins. At our week 8 appointment we had an ultrasound, which was how they found the twins.

I was very nauseous and was vomiting frequently. I got a lot of hives. I’ve been getting hives for about 10 years, but it was worse the whole 1st trimester than it’s ever been. I started using Palmer’s belly lotion everyday to help prevent stretch marks and itchiness.

We never thought that getting pregnant would result in twins, but we were sure wrong! Here‘s an article from the Mayo Clinic about how twins are conceived and about twin pregnancy. 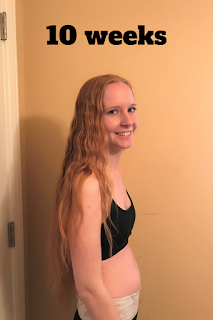 This week was the hardest week of my pregnancy so far. I got some sort of cold or sickness this week. I was vomiting, nauseous, had bad headaches, a slight fever (fluctuated between 99 and 101), had a terrible cough, and lost my voice. 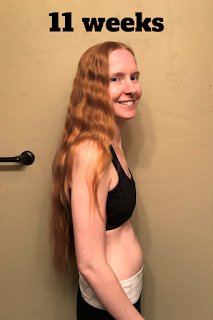 I still had my cough, was always nauseous, and vomiting. The whole first trimester all I could really eat was fruit and potato products, like French fries, tater tots, and hash browns. Trips to Jamba Juice became frequent for us. 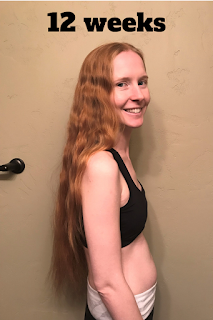 At 12 weeks we had our second doctor’s appointment, which included an ultrasound. We got to hear both babies heartbeats for the first time, which was a big highlight of the pregnancy! The doctor said both babies were measuring how they should be. 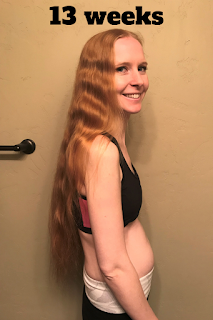 At this point in the pregnancy I had been throwing up so much that I had lost 5 pounds. My doctor said this was normal because of how bad my morning sickness had been. I tried Zofran and hated it. I did the swallow pills and the dissolving ones.

The dissolving ones were better, but both gave me severe stomach aches. I would take 1 pill and the stomach ache would last about 2-3 days. In my opinion, it was not worth it. 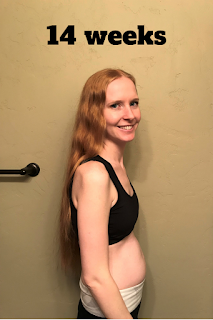 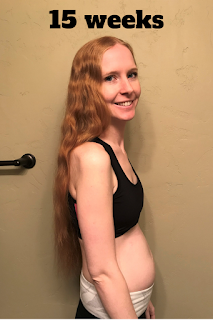 This was when I first felt the babies move. It was so exciting! It felt like there were 2 little goldfish swimming around in me.

A nurse from my doctor’s office called me this week and told me to start taking 81mg of baby aspirin everyday until I’m 36 weeks. This is to prevent blood clots, because they can be common in twin pregnancies. 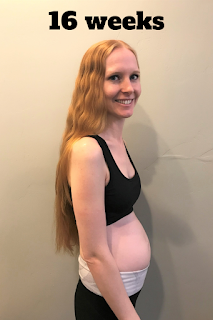 It was at our 16 week appointment that we found out genders of our twins. We’re having a boy and a girl! This was not the typical appointment where you find out the genders, but since we were having an ultrasound anyway we asked the doctor if he could try to see.

Baby B made it easy to see that he’s a boy, but baby A was so active that the doctor couldn’t get a clear shot. The sonographer in the office didn’t have an appointment going on at the time, so she was able to do a second ultrasound and tell us that baby A is a baby girl. Before this we had a good idea of what our baby names would be, but during this week we decided on them for sure.

This was the week that I started to not feel so nauseous and I stopped vomiting. The nausea did continue, but not everyday like it had been. 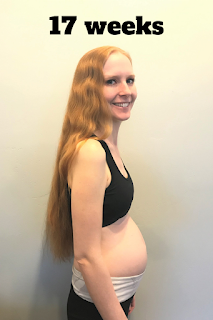 Around week 17 I started to dizzy and faint and get pale frequently. It usually happens between meals or while I’m in the shower. I also started experiencing stomach pains this week. I had a sharp pain just to the right of my belly button.

I was really worried, so I called the nurse hotline and they weren’t sure what was causing it. They concluded that it was probably growing pains from the babies getting bigger and my uterus stretching, but told me to go to the hospital if it got worse. Thankfully it didn’t get worse. 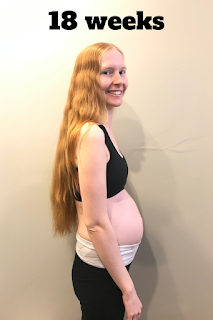 This was one of the most exciting weeks because we felt baby girl from the outside for the first time! She woke me u one morning around 5am with strong kicks I could feel by putting my hand on my lower stomach. I was so excited a few hours later to have Adam feel her, but she didn’t move much the rest of the day. He was able to feel her the next day though! 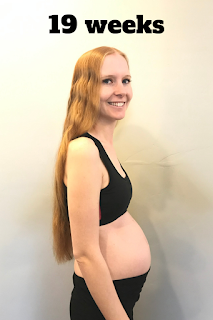 Baby boy took a few days longer to let us feel him from the outside, but we both felt him during week 19! This was also the week that I started to have back pain everyday. I use the heating pad often to help with this. Taking baths also relieves the back pain. My doctor told me to just make sure the water isn’t so hot that it raises my body temperature. 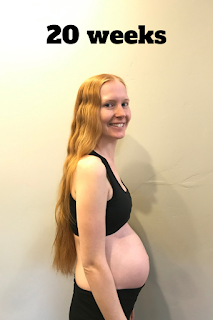 At the end of week 20 we had our anatomy scan ultrasound appointment. This ultrasound took about 45 minutes. The sonographer looked at all the major organs and bones for baby A, then did the same for baby B. This is typically the appointment where they can tell you the baby’s gender, but we already knew that for both babies.

Our twins health was great and they were measuring big. Baby girl was in the 92nd percentile and baby boy in the 95th. They were both measuring about a week and a half ahead. I think the babies had just gone through a growth spurt because my stomach got much bigger, was hurting, and I was very hungry. The babies were both head down which is good if I’m going to have a natural birth.

During week 20 my heartburn became a lot worse than before. I’ve heard it can be worse with twins. I also had to start sleeping differently. I love sleeping on my back, but it really hurts my back to do that now. The position that is best for my back is to sleep on my side. I put a pillow between my knees and under my stomach to support it. 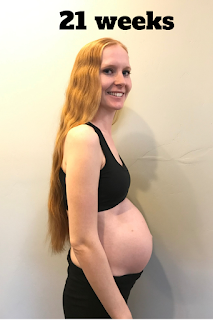 My stomach started to itch a little during this week. Anytime it itches, I put my belly lotion on rather than scratching. It’s super tempting to scratch, but I’ve heard that can cause stretch marks. As of 21 weeks I have gained back the 5 pounds that I lost in the beginning and I’ve gained another 6 pounds on top of that. 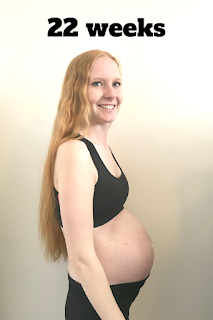 At 22 weeks pregnant I started to get sciatic nerve pain on my right side. It made sleeping so much harder. I started sleeping with a body pillow. I also alternate between the heating pad and ice pack for this pain.

We went on our first flight of the pregnancy during this week. I get nauseas on flights and always take a motion sickness pill, even when not pregnant. My doctor prescribed me a scopolamine patch to help with this. I think it worked pretty well, but I was still a tiny bit nauseous and dizzy on the flight. 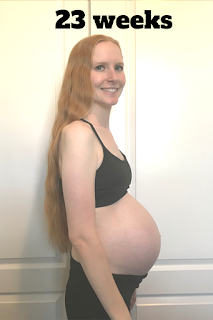 23 weeks was the scariest week of the pregnancy so far. I woke up one morning and was bleeding. I called the nurse and she said to go to labor and delivery. They did a non-stress test and a few ultrasounds. They could not find the source of the bleeding, but both of the twins and I looked good and healthy.

They put me on a modified bed rest for about 3 days. I had a checkup appointment a few days later and everything still looked good, so they took me off of bed rest. They did say that my cervix looks a little shorter than it should, so this could possibly lead to it needing to be stitched up and I would be on bed rest the rest of the pregnancy. Hoping this doesn’t happen! They also said that I’ve been having Braxton Hicks contractions.

We think that the bleeding could have somehow been caused from flying the day before.

One of the worst things they did at the hospital was an hour long ultrasound. They had me completely flat on my back for it, which made me so sick. The babies were on an aorta and were cutting off blood flow. I had no feeling in my arms, one leg, and my face. I also got super nauseous and my whole body was shaking uncontrollably. They gave me a Zofran, but I didn’t start to feel better till the ultrasound was over and I could sit up. 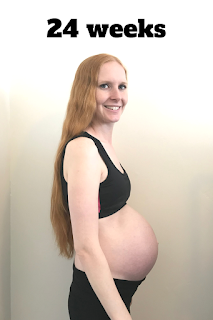 Week 24 has not been the easiest, but it’s been much better than 23 weeks. One day I woke up with a crazy amount of pain in my lower belly and lower back. I called the nurse and she said that it’s round ligament pain, which means that my uterus is stretching more. It was very painful for most of the day, but thankfully went away.

We had a doctor appt this week and everything looked great with the babies during our ultrasound. This was the only picture we got from the ultrasound- 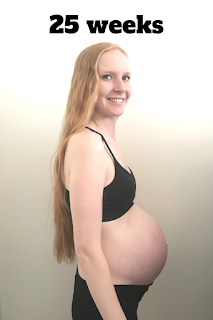 During week 25 I mainly just had the same symptoms that I’ve been having, like heartburn, back pain, and belly pain. There was one day though that I had a lot of contractions. This was a little bit scary to me since preterm labor is something to be worried about with twins. I called the nurse and she said it was most likely Braxton Hicks contractions and to not be worried unless they get closer together and more intense. Thankfully they went away after that day though. 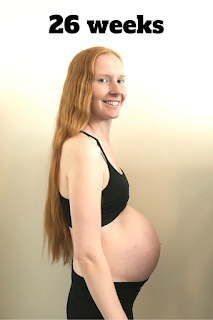 Week 26 was full of nausea and exhaustion. I was at least a little nauseous almost everyday, but some days were worse than others. I also found that I was sleeping a lot more and would get worn out pretty easily. The summer heat sure didn’t help with my exhaustion. 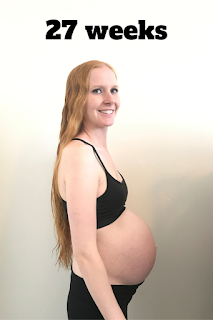 We had our twins at 27 weeks 3 days! Those couple days of being 27 weeks pregnant were rough. I had a lot of heartburn, back pain, and contractions. I didn’t feel baby boy move much, which really worried me. We are so happy that the twins were delivered safely.

If you enjoyed this article, please pin this image: 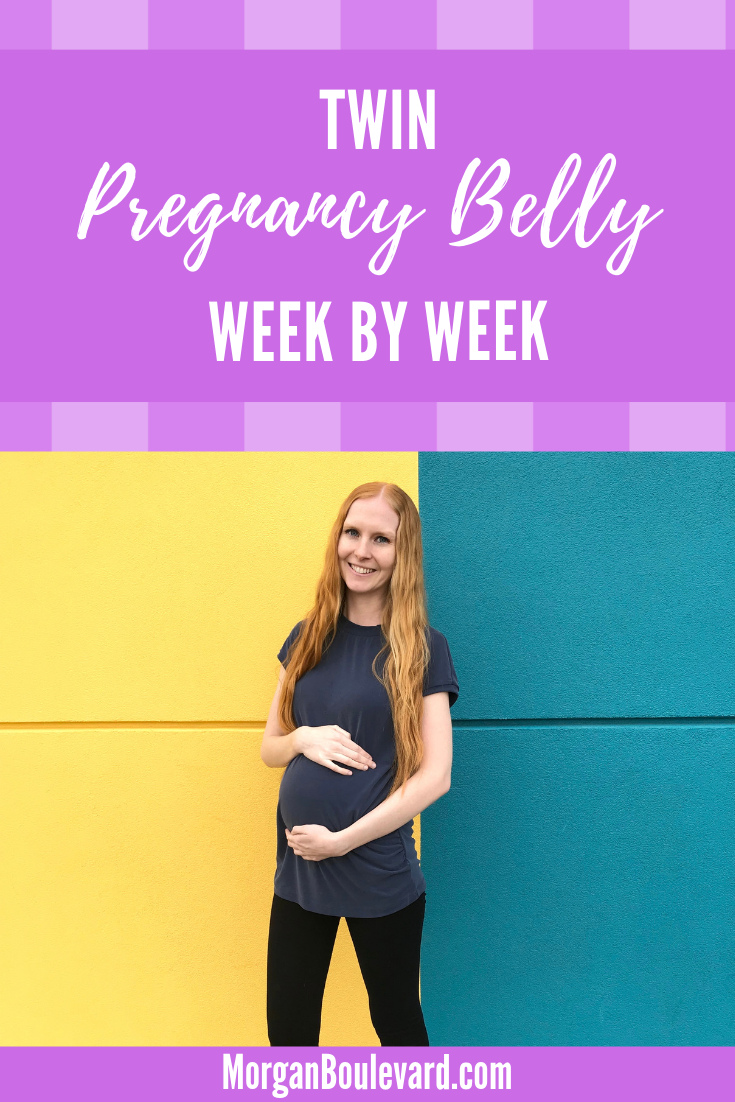 As an Amazon Associate I earn from qualifying purchases.

Previous Post: « 72 Amazing Vegan Quotes You’ll Wish You Said
Next Post: What To Order At CoreLife Eatery If You’re a Vegan »