Do you have any plans to travel to Seattle? If not, you should definitely reconsider and add it to your list of places to visit soon. Seattle is a very vegan friendly city. Here are 14 vegan restaurants in Seattle Washington that you have to hit up!

Plum Bistro is an all vegan restaurant in the Capitol Hill area of Seattle. They believe they can even impress a carnivore with their amazing dishes. They have their main restaurant, a salad place called Plum Chopped, a dessert shop named Sugar Plum, and a food truck. Here’s their menu.

Araya’s Place is a vegan Thai restaurant. They’ve been around since 1987 and have 3 locations in the Seattle area. We love the location in Bellevue. It is really pretty and the workers are so nice and friendly. They have a lunch buffet that draws big crowds, or you can order whatever you want from their menu. Our favorite things to get are their Vegetarian Spring Rolls, Kaeng Ka-Ri (yellow) curry, and Pad Thai. Here’s their menu.

Veggie Grill is all about the veggies. They love bringing people together to taste veggies in their season. They put a lot of time and thought into each dish on their menu so that you can taste veggies and vegan food in a way you’ve never experienced before. On their menu they have burgers, sandwiches, burritos, bowls, salads, veggies, and desserts. Here’s their menu.

Harvest Beat is all about creating a healthy world. They have a set menu of five courses that is all plant-based. A typical dinner here will last you about 1.5-2 hours. Their menu changes often. The reason that they have a pre-set menu is because they try to reduce food waste and this helps them to do that. They try to use organic ingredients that are currently in season. Here’s their menu.

Wayward Vegan Café is a 100% vegan owned and operated café in Seattle that opened in 2004. They specialize in homestyle cooking, like American diner food. They have bottomless coffee, large portion sizes, and a friendly staff. The pictures of their food on their Instagram page all look so delicious and comforting. Here’s their menu.

No Bones Beach Club has tropical vibes in a beach shack. They have an eclectic menu of vegan bites. Their food and cocktails are island inspired. They use the freshest ingredients and always serve local food when possible. They started running their food truck in 2014 and opened their brick and mortar location in 2016. They donate monthly to local animal sanctuaries. Here’s their menu.

Celest Café is 100% vegan, soy-free, and gluten-free. They are very accommodating if you have any special diet requirements and love to help you find food that fits what you can eat. They serve breakfast and lunch options. Here’s their menu.

At Papas Hot Potatoes they mainly serve potato dishes. You can choose from a few options on their menu or you can customize your own by choosing from a list of toppings. They also have some add-ons and sides that you can add to your order. Their chef and co-founder began eating an all plant-based diet when he had no energy and auto-immune disease symptoms. This helped him a lot and he felt the best he did in years.

The Heartbeet Organic Superfoods cafe serves superfood smoothies, bowls, salads, soups, drinks, and desserts. They strive to help people eat better and have healthier lives. Everything they serve is 100% gluten-free and dairy-free. Most of it is even raw. They have quick service that customers love.

Kati Vegan Thai has traditional Thai menu items with modern flavors. They have a lot of gluten-free menu items and those are marked on their menu with a “GF” next to the item. They serve appetizers, curry, stir frys, noodles, salad, soup, rice, and sweets. Here’s their menu.

Pizza Pi Vegan Pizzeria is America’s oldest vegan pizzeria. They have sides, salads, desserts, calzones, and tons of pizza options. Their menu has a lot of specialty pies that you can choose to order from, or you can build your own and choose your size, toppings, sauce, and cheese. Here’s their menu.

Loving Hut is known for its vegan cuisine. They have an Asian menu that consists of appetizers, soups, salads, noodles, rice, sides, entrees, sandwiches, desserts, and beverages. They have locations around the world and each one has a different menu. They believe that their menu is a great starting point for people who are wanting to transition to a plant-based diet. Their food is affordable.  When you eat at Loving Hut you can do a quick casual service or a full service dining. Here’s their menu.

Chaco Canyon Organic Café has 3 locations in Seattle, located in West Seattle, Greenwood, and Queen Anne. Each location has its own menu. They have a lot of different menu options including breakfast, sandwiches, soups, salads, grain bowls, juices, smoothies, and kids meals.

Which of these restaurants do you want to eat at? 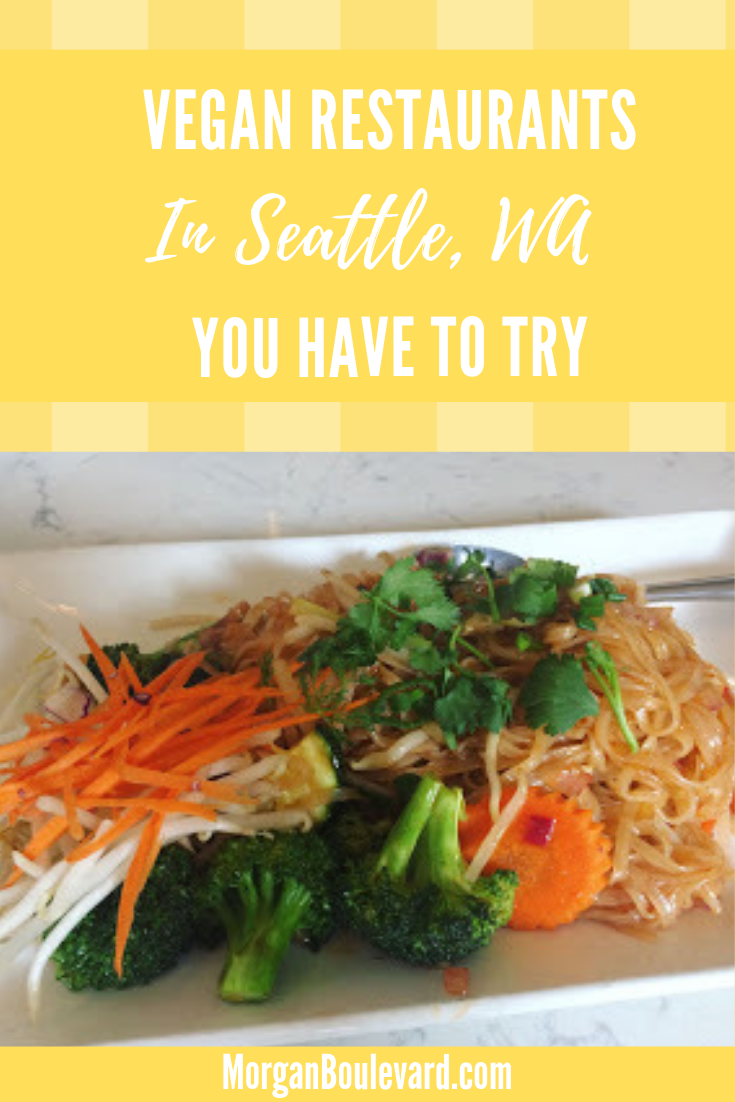